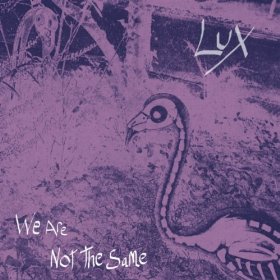 Album Name: We Are Not the Same
Artist: Lux
Year/Label: 2012 / Independent
[Buy (used) at Amazon]
[Download at Amazon]

David Chandler and Leah Rosen are Lux and this is their debut album. It’s a pretty mixed bag of styles, but it all holds together well.

Coroner’s Office is a synthy and poppy song where Chandler sounds suitably laconic.

The Window sees Rosen on vocals with a sweet tone and a catchy very eighties backing. It’s a perfectly summery song and it might endear itself to the listener by that fact alone.

Cerebellar Ataxia is a haunting moment that sees the duo making some very filmic music. It sounds like a sci-fi soundtrack with swirling synths and moody tones.

I’ll Try to Ignore the Fact That You Are Drowning is a harder-edged track that sees Chandler assume a more energized tone and it suits him well.

It’s a remarkable album all told.