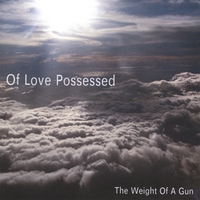 Of Love Possessed’s “The Weight Of A Gun” general feel is pretty ethereal when you listen to this record as a whole.

But I have this record in my iPod shuffling with all the other CDs I am reviewing right now. When some of the songs came up in my shuffle I’ve been shocked to see it’s them because these songs ranged from pretty straightforward rock, even classic rock (which always sounds like it’s got a little country in it to me), and pop. This band has me perplexed.

At one point a song came on that I thought, ‘oh this is really beautiful…who is it?’ and it was them, but the song is called Rot. Which doesn’t sound all that beautiful! But it’s a lovely song.

They definitely mix genres here. But I’d say overall they’re ambient pop. And all the songs are good whether they match each other or not. Oddly enough, the album sounds really good as a whole.