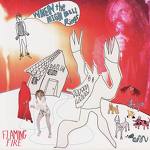 Well, this band is different. For starters they’re much “harder” than most of the stuff I listen to. But I have an open mind. I can listen to many genres and enjoy them all the same. In fact, I’ve reviewed Flaming Fire before. Back in 2003 when they released “Songs From the Shining Temple”.

They also have an illustrated bible site. They’ve taken bible stories and feature artists’ renderings of them. This record (and probably the previous one, I just didn’t really get it at the time) is sort of a version of that.

This is some psychedlic-punk-avant weird music. That’s not a bad thing! They have a very unique and interesting sound. I don’t think you could say that they don’t know what they’re doing or are not good at it. But I will say that it’s not for everyone.

There’s something very theatrical about some of the songs. Now calm down, I don’t mean it reminds me of A Chorus Line. I mean that I can imagine these songs being performed on stage, with great costumes and an amazing light show.

While I appreciate what they’re doing, and they’re very good at it, it’s not personally my everyday thing. I like the biblical references, I mean is there a more gruesome book? But the music is just a little too much for me for the whole album. I’d certainly put some of these songs on a mix party CD though.

Those who like harder punk-ish music though I think will really dig this. It’s’ very well done.