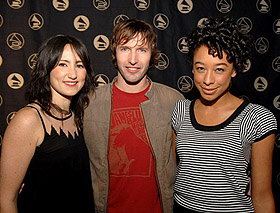 Nominations for the 49th Annual GRAMMY Awards were announced today by The Recording Academy, reflecting a year in which multiple genres were represented in top categories, new up-and-comers were nominated alongside established artists and a diverse array of producers and other creative professionals garnered multiple nominations. The 49th Annual GRAMMY Awards will be held on “GRAMMY Sunday,” Feb. 11, at Staples Center in Los Angeles and once again will be broadcast live in high-definition TV and 5.1 surround sound on CBS from 8 â€“ 11:30 p.m. (ET/PT).

Here are some highlights of Collected Soundsâ€™ favorites who have been nominated. Congrats everyone!! Corinne Bailey Rae! You go!!! I love this record. I hope it wins in all its categories! And of course, my Sarah.

Record Of The Year
Put Your Records On – Corinne Bailey Rae