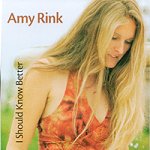 “I Should Know Better” is a family affair. Amy Rink is joined by her two brothers Mike and Greg. They’ve helped with the writing, playing instruments and singing on every song.

Amy Rink’s voice is very low and subtle. This joined with the very strong bass line give these songs make a very LOW feeling. This seems especially incongruous on the track “Angel”. It seems like the opposite of what you would think they would be going for. The beginning is light and airy, then when the chorus starts, that bass kicks in.

It’s interesting that this CD includes several different genres. There’s blues, reggae, rock, and pop. But most of the songs have a little funky twist to them. This may be due to the large part the bass guitar plays. It’s prominent in almost every song. Almost overshadowing on some.

No doubt the musicians are very talented. The songs cover a variety of topics. Amy writes from dreams, from stories, from experiences, and the lyrics are quite clever.

I can’t help feeling like there is something (small) missing, something that would be there if they were playing in a loud bar. It’s small, and I can’t put my finger on it. But this is one of those recordings where I feel like the live versions would be fabulous. Especially when I hear Good Enough” which is a funky bluesy song.

“Speak of My Silence” is a stand out for me. It showcases Amy’s sultry vocals. I imagine her slinking around on the stage.

“Remember Me” and “The Other Side” also stand out as Amy takes a chance her on her voice by using the upper registers and not sticking with just those low notes. It comes out nicely.