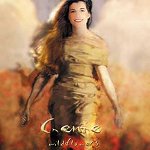 It seems lately I’ve been receiving a lot of CDs that feature very girly, cutesy vocals. This is no exception. But Genie’s voice is not only little girly but it’s also very soft and whispery.

The songs are written very much like Christian songs are written. They are in major keys, they melody goes exactly where you expect and there’s lots of crescendo and decrescendo. Though these are not exactly faith-based lyric-wise, the instrumentation brings up that feeling. I don’t know if that makes any sense, but those of you who are familiar with early Amy Grant, Michael W. Smith, Sandy Patti, etc may understand that’s the sound and structure I’m talking about.

“Quiet Place” is an exception to this. There are some minor chord changes and it’s a lovely song.

Genies strong point is her lyric writing. The songs are very poetic. She sings of love mostly, but also of angels and birds and well, wildflowers. The title track is a lovely story-song with a nice message.

“Wildflowers to some they are just weeds
But in the eyes of grandmother
Beautiful they’d be
They were beautiful to her
Because they came from me.”

The second half of this recording is instrumental (it’s a repeat of the first half of the CD but without the vocals) and it’s very relaxing. Genie has personally suffered from chronic pain and she wrote these songs as a comfort to herself and to others experiencing the same kind of illness. I imagine it works beautifully. She’s a gifted piano player as well as lyricist.

I must also point out that the cover art is gorgeous. Apparently there are two covers, one is a photo of Genie, and the other is what looks to be a “doctored” photo that looks like a painting. This is the one I have (though CD Baby shows the other one). I understand her husband, Troy Nilsson, does the art. His work is really very nice, as I’ve seen some of his other work as well. It’s very ethereal. It matches the music nicely. This is one case where you can judge the music by the cover.

The tone of the CD is spiritual, but not religious or preachy which I, personally, really appreciate. It’s really a very pretty recording. If you like soft whispery vocals and angelic melodies, this one’s for you. This would also make a great lullaby CD for children.