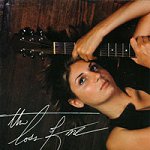 This debut album By Vivian Mulder brings a smile to my face. She sings softly but surely and writes great songs.

“Hard Man” is darker, but the music is still mellow. Mulder sings of a dysfunctional relationship in a very revealing way. “I feel you strengthen my threshold for pain” she sings, chillingly.

“The Artist” is a song with lots of soul. Mulder sings of the titular character and adds a verse in French. The title track is an exotic-flavoured beauty with cutting words about misogyny.

“The Prospect of Love” is a sad but not resigned song.

“The Loss of Me” is brilliant.