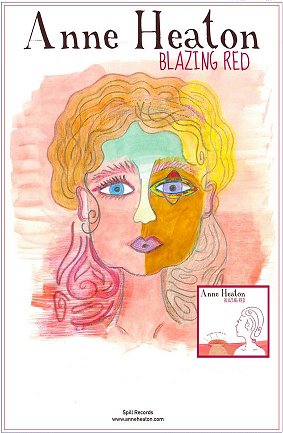 Anne Heaton will be playing at the Sundance Film Festival in Park City, Utah.
I see she’s also going to be on the Cayamo Cruise. Boy, it’s getting harder and harder to resist going on that. I can’t afford it but….
Also I wanted to let you know that I’ve been greatly enjoying her latest record, Blazing Red. I haven’t written a full review yet, but I will soon. For now, check it out yourself on her [MySpace] page.

I will tell you I am madly in love with the song “Jump”.

January 21st-23rd
SUNDANCE FILM FESTIVAL*
Synchronized Concert Series
@ THE STAR BAR
Park City, UTAH
*Proceeds from all monies raised at the concert series will go to
Pueblo a Pueblo, to aid in the rebuilding of a community hospital in
Santiago Atitlan, Guatemala that was devastated by mudslides.

For dates past January……

Monday, February 9th 4:00-8:00PM
Bixby Park* (on Cherry Avenue & Ocean Blvd)
Long Beach, CA *I am a special guest at author Suzanne Toro’s book
launch party. She will be giving away copies of her new book “Bare
Naked Bliss” and feeding everyone! I will probably be playing but
we’re waiting to hear about the sound system. Either way, come by for
a free book and some delicious food. For more info, visit:
http://suzannetoro.com

February 10th
LOS ANGELES, CA
LOOKING FOR A HOUSE CONCERT*
If you’d like to host a house concert
or special event, email info@anneheaton.com for details

February 11th
LOS ANGELES, CA
LOOKING FOR A HOUSE CONCERT*
If you’d like to host a house concert,
or special event email info@anneheaton.com for details