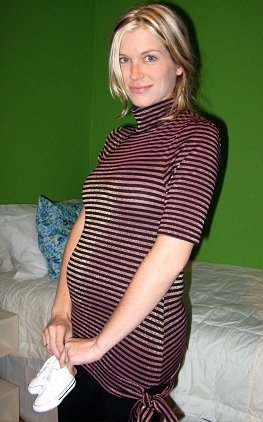 Los Angeles, CAâ€”Monday, January 14, 2008â€” Los Angeles-based singer/songwriter, Charlotte Martin and producer/mixer/artist, Ken Andrews, are expecting their first born in late April of 2008. The couple married in September of 2005, and have since been touring and recording non-stop. Now the couple is preparing for the arrival of their new baby boy.

Andrews’ most recent release is a live album, Live (Secrets of the Lost Satellite Tour, Spring 2007). The album was recorded during his Secrets of the Lost Satellite spring tour last year and features songs spanning Andrews’ career from Failure to current. Ken is also known for his production and mixing work with such famed acts as Beck, Tenacious D, and Black Rebel Motorcycle Club.

Martin’s latest album is a studio album of covers [Reproductions] ranging from the piano-driven ballad “Just Like Heaven” (originally recorded by The Cure) to her enticingly brooding rendition of “Angel” (originally recorded by Massive Attack). Reproductions is a conceptual album dealing with the loss, pain, and hope surrounding the couple’s miscarriage in 2007. Billboard praises, “Martin authentically conveys the feeling of longing with imploring vocals, letting her sweetly feminine tone propel the lyric of desire.”

A companion piece to Martin’s Reproductions is the emotionally stimulating music video for “Elderly Woman Behind the Counter in a Small Town” (originally recorded by Pearl Jam) directed by Peter Dawson. The video, much like the album, is an emotional journey in dealing with the loss of a child.

Live (Secrets of the Lost Satellite Tour, Spring 2007) and Reproductions are now available on Amazon, Musictoday, and most digital music retailers.

Amy’s Note: I am soooo happy for her. And doesn’t she just glow? I kind of thought that’s what the album was alluding to but I didn’t want to bring up sad things so I sort of glossed over that in [my review].

← Finally one of “My Girls” on American Idol!
Album Review: A Hundred Birds by Sylvi Alli →