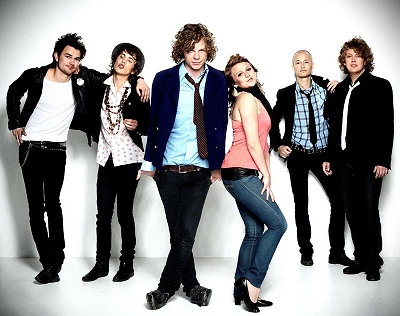 For £3, the price of a bottle of Budweiser at most of the bars in this city that is arguably unrivalled in its contribution to pop music. Tonight, for the same price, you can see six Danes who form Alphabeat stomp through a bubbly and colourful set of striding boy/girl vocal interchanging pop. For the most part these cheery Danes, who make Romeo Stoddart seem manic depressive, swerve between flighty thrust of The Concretes and the quirkiness of The Scissor Sisters. Sprinkling in some feel-good frivolity to match Mika, who they supported across Europe and it seems like that was a match made in heaven. This comes off through the front pairing of Anders SG and Stine Bransen.

Troll Hansen and Anders Rheinholdt step to the fore provide the thrust and push for a drum and bass thrusting snap, ‘Fascination’. This turns into a rawer, light yelping vocal release to match the potency of fellow Scandinavians The Sounds. Taking matters to a more new wave plain. Recent single and gush of pure inhibition airing pop, ‘Fantastic Six’ demonstrates oomph and cheery abandon that starts to rub off on the initially wary local gathering, who don’t quiet no how to fully respond at times.

It’s only upon hitting the rain soaked street outside when a sighting of an obligatory Sex Pistols tshirt catches the eye. That the realisation sets in as to what Alphabeat might actually be achieving. They are producing a sound independently that is usually so manufactured, it should be sold in tins. This is done, especially in a live setting, with such joy and enthusiasm oblivious to what anyone would dare to write, say or criticise them for. Their approach almost says “sod you”, to any prospective backlash before it is written or even fully thought out. Isn’t this spirit what true punk was all about, ironically?