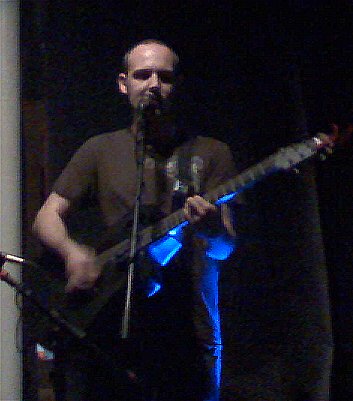 It’s weird for me to see Gregory any place other than my living room. He has played the house several times and while I’ve seen him perform at other venues, it’s still strange. I would have loved to host him at the house but we had another show too close in time to this one. So Gingko it was.

I’ve been to shows at Gingko before but this was strange. We walked in late (of course, I don’t know what’s wrong with me lately) and opener, Kirsten Melrose, was already playing. The place was dark and looked like it was closed up. The counter where you can usually buy coffee, scones, etc, was all closed up.

We tried to sneak in and find a seat but the floor is so creaky our every move was highlighted. So we stood still until we could run and grab a seat during the applause.

I was not previously familiar with Kirsten Melrose but she was really good. She has a lovely voice and she and her backup singer (I want to say Cora?) sound lovely together.

When she was finished the lone employee flipped on the lights and opened up the counter. We got our coffees, she closed up, turned the lights out again and we and sat back down for Gregory’s set.

He was kind of on fire! If you’ve seen him perform you know that he is a very emotional performer. He seemed even more so this time. I’ll admit some of the songs were so wildly sung that I was unable to discern the lyrics, but that’s OK. I love that he’s so into it.

He even made a little inside joke. He had been with us the previous night at the Swell Season show and made a little joke explaining that one of his songs was about ‘the conflict between the head and the heart’. Those of us that knew what he was referring to guffawed.

Fun show, though I wish it had taken place in my living room. Hopefully next time!