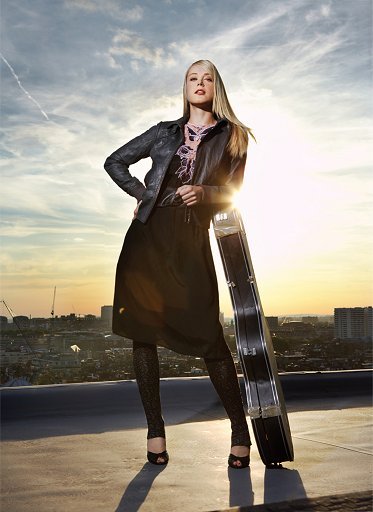 Tina Dico – the Danish born British based singer-songwriter acclaimed (and multi-platinum at home) for her ethereal voice and stellar songwriting — is set to release her fourth studio album Count to Ten on Defend Music on April 8, 2008. Following her well regarded international solo debut, ‘In the Red’ — not to mention her ascent to worldwide fame as the stunning lead vocalist on Zero 7’s hit single, Home — her latest, Count to Ten is a delicious and atmospheric eleven song meditation on life and love. (you can read more of the press release after the jump)

Amy’s Note: I got an advance copy of this and while I have only had a chance to listen to it once, I already love Sacre Coeur. I can’t wait to delve deeper into this. I will post my review just as soon as I get it written (I’m hoping for it happening before the release date, but I know me, and therefore am not holding my breath).

Produced by Tina and her longtime collaborator, Dennis ‘Ghettoblast’ Alghren, Count to Ten juxtaposes of warm acoustic guitars and beautiful vocals with electronic (even trip-hop inspired) percussion and a dance-floor-ready low end. The heart of Count to Ten is Tina’s undeniable voice, breathing life into a collection of poetic, otherworldly lyrics and epic choruses.

The title track, Count to Ten is an introspective ballad driven piano, acoustic guitar and Dico’s realization that sometimes to find the answers to difficult questions, one must cast aside the outside world and look within. Sacre Coeur is a dark and haunting melody that Dico wrote while visiting the famous Parisian cathedral of the same name.

Conversely, On The Run was born out of the immense freedom that is associated with a traveling singer-songwriter – a troubadour never feeling settled while journeying and performing in venues of all sizes around the world. With a guitar riff inspired by Radiohead, the refrain states “Everybody’s got to end up somewhere/ I’m just taking my time to get there/ It looks like freedom and it smells like fun, but it feels like being on the run.”

‘Count to Ten’ is the hotly anticipated follow up to Dico’s critically lauded In the Red which received a prestigious Danish Grammy award for Best Songwriter and was voted Best Composer at the Danish Music Critics Awards. She has toured all over the world both with her solo material and as a part of Zero 7. North American tour dates are being planned for spring 2008 following the U.S. release of Count to Ten.