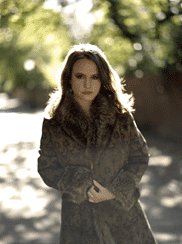 How long before Amy Smith reaches your heart?

An Interview with Amy Smith by Dave Adair

The picture of refinement and defiance that awaited me at the end of my laborious ascension of the Liverpool Barfly steps was a refreshing and welcoming site. Amy Smith very kindly gave up some time before heading of to visit her mother in the city where she was brought up, studied and wrote songs in. The natural starting point for our frank discussion was her recent appearance at the USA industry showcase that is the SXSW Festival in Texas, whereby Amy went down better than a pro-capital punishment lobbyist. Does she have more of an American friendly sound then?

Amy Smith:”Erm, yeah you could say that my sound lends itself the US style and I have songs of mine that go down really well there. However, consolidating my sound in the UK is important to me as well. I am just trying to find the best home for my music at the moment.”

David Adair: Speaking of home; Amy is for all intents and purposes a Liverpudlian, so how would she define the local scene for the uninitiated and does she fit in with it? The artist produced a thoughtful gaze before replying;

Amy Smith: “Well I haven’t been here for a while; I have been touring a lot as a sessional singer, so I have not had much chance to check out the local scene. I am aware of bands that have come out of here and would like the opportunity to delve deeper into the Liverpoool scene.”

Does she consider herself a Liverpool artist, as that is what some people have termed her (although she was born in Warwickshire)?

Amy Smith: “Not really, and I don’t believe that the bands here would class me as one either. I have my own sound”.

The pelting percussion of the sound checking support band for tonight’s show; Ragz provided an intriguing soundtrack to this interview. Therefore, I felt it time to lunge into the meaty topic of Amy’s songs, as her ‘Songs from the Landing Tapes EP’ is due to be released soon. For me the EP draws together artists like Heather Nova, Norah Jones, Sandy Denny and Emiliana Torrini in order to fill a void in the folk/blues/pop genres. How does she feel about this summation?

Amy Smith: “I don’t really think about it. I just sing songs as I think they should be sung. I like to try and make my music folk/blues styled; my voice is changing all the time.”

I felt Amy was relaxing and relishing talking about her music and it was plain to see that she feels passionate about it. What about highlight track onthe forthcoming EP; ‘How Long’ that possesses a longing feel and tackles the subject matter of the course of true love with lucid depth and feeling?

Amy Smith: “That was written about my thoughts after a relationship is over. It is based on both past relationships that I have had and general observations. It is a song that asks for how long the feeling of awfulness that comes with a relationship ending, will last? It looks at the ending a relationship from both sides, as I have also ended a relationship and thought about the pain it is causing the other person.”

This number is immediately juxtaposed on the EP, by the soothingly feel good; ‘105ft High’ that is as lush and welcoming as songs from her contemporary Emiliana Torrini. How does she feel after singing such a positive and heart-warming corker?

Amy Smith: “It was a written a long while ago, while I was sat on a train station. It doesn’t mean that much compared to some of my other songs that are a lot more meaningful. So ‘105 ft High’ is a nice song for me to sing and is easy to get into.”

The above songs and others in her locker are very calm and soothing despite some of them covering a darker subject matter at times, so I had to ask; who or what makes her angry? A telling and thoughtful silence delayed the reply;

Amy Smith: “All sorts of things lack of tolerance. Extremism; religious and in general and you can add rudeness and egotism to that list as well.”

In order to draw things to a close I enquired as to which of Amy’s songs summed up her current mood and why?

Amy Smith: “I think it would be my last song; ‘In My Hands’ that is a personal reaction to past relationships with friends and others that didn’t make me feel too good. I want to move on from that style and be a little more abstract in future.”

Later on in the evening, the amiable and endearing songstress went onto produce a crisp and promising forty minute set, inclusive of the above number and the engaging ‘How Long’ that left people thinking and pondering life.