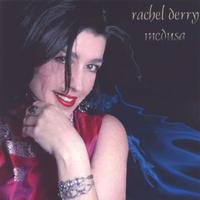 Rachel Derry’s debut sees the Canadian performing literate pop in the vein of Tori Amos and Fiona Apple. The title track is lyrically inspired and the melody fluid and sweet.

The words compare someone’s love to Medusa.(whose gaze could turn people to stone and whose hair was a nest of moving snakes in Greek mythology). That’s a pretty strong and unusual image. “Swallow” is a song that has strong vocal passages and a empathic words of despair. Derry has a gift for writing songs on difficult subjects.

“Dance for Sorrow” is an up-tempo song in a latin style. “Liquid” is delicate and ornate as Derry’s vocie soars atop the backing.

This debut is a fine record.