An Interview with Randi Russo by Dave Adair 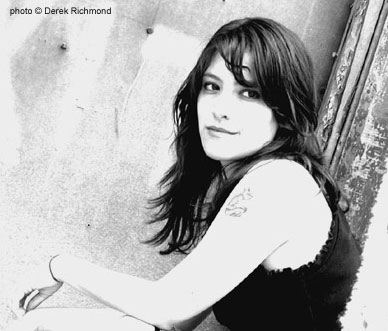 The dexterously talented New York singer and artist; Randi Russo captures mundane life in whatever she does; dusts it off and serves it up as a patently palatable feast. Her last album; ‘Solar Bipolar’ that was released in 2001, still has people talking and the rustic cathartic nature of it and it has helped people let off more steam than they would have done spending a week in a sauna. Built around slightly curt, yet strangely welcoming and soothing numbers like ‘Matchless’ and the pungent ‘Lucy’s Plan’, saw Randi picking up the gauntlet from Patti Smith and putting a coat of varnish upon it. Randi kindly loans some of her time to talk about her new musical direction, as she uses the experience gained from Solar Bipolar and produced some calmer and more crafted offerings with another album looming on the horizon. As ever, the welcoming New Yorker is open and honest, providing a refreshing insight into the grass roots musical world.

David Adair: You have finished recording a demo featuring some crisp, enchanting and commanding more pop friendly numbers, than your raw and cathartic anti folk debut album ‘Solar Bipolar’ (S B P). How has your approach to producing music changed since 2001 the year of S B P’s release?

Randi Russo: Well, I’m looking to expand our sound as a band. I want to go deeper, lyrically and musically. My most recent recordings have more instrumentation on it. The songs seem to be darker and deeper (with the exception of Where You Wanna Go, which is somewhat more pop than rock). I’m not afraid to have songs that are over 5 or 6 minutes long, which my rep told me that would be a drawback, since labels want to hear songs that are anywhere from 2-4 minutes long. But I like the ‘epic’ songs… songs that go through a variety of emotions, songs that lyrically dissect opposing emotions and combine these seemingly two different emotions (happy & sad, vulnerable & confident, angry & calm, etc.) within one song.

DA: On the topic of S B P, congratulations on getting a distribution deal for this via Big Daddy Music. Do you think it is important for people to listen to S B P before having a foray into your alluring new material, or does it not matter?

RR:Well, some have told me that SBP is so good and hasn’t gotten the exposure that it deserves, that I should release an EP with new recordings plus a few songs from SBP. I’m actually considering this idea. Perhaps, I’ll put four or five new recordings, along with two SBP songs. I know I would like to put on We Forget (from SBP), because, since it was the last song on the album, I don’t think people always got to it. SBP is a long album (over 52 minutes) and some people just listen to the first few songs over and over again, and never get to the end of the album (I’m guilty of doing this as well with the music I buy). It’s great that SBP got a distribution deal, but without touring, the CDs will just sit on the racks, which doesn’t help much. I want to tour more to get people more aware of my music (both the old and the new stuff), but, financially, that’s not always possible.

Overall, though, I do not think it’s necessary for one to hear SBP before hearing the newer material. It’s nice to have people hear my music grow and change over time, but it’s not necessary.

DA: Two of your new songs have been getting some Radio play over in there in the U.S.A; “Shout Like a Lady” & “Release Me.” Are these representatives of the sound you want to attain and, how would you describe their sound for the uninitiated?

RR:I chose these two songs (with the help of my band mates’ and friends’ opinions) to be released for radio because they show both sides of what I do. Shout like a Lady is a stark, dark, haunting song that is also quite tender, vulnerable and cerebral. I love the instrumentation on it. Randy Jamrok (drums) does a great marching drumbeat on it; Lenny Molotov (lap steel, bass, keyboards and glockenspiel) makes the song absolutely stunning; and Lafrae Sci adds this great percussion. The song goes from a quiet beginning to a very large, sublime ending. It’s quite gorgeous (mainly due to Lenny’s contributions).
Now, on the other hand, Release Me is a cathartic, bluesy rocker. This is my other side… the less cerebral side and the more urgent, physical side. It’s also quite a spiritual song, in the same way that early blues were spiritual in nature, yet had those ‘sexy’ guitar riffs to accompany the spiritual side. I figured that the radio stations or DJs can choose which song better fits their format.

DA: How does it feel to be a New Yorker at the moment? Have your views changed over recent years?

RR: I love being a New Yorker. If you’ve lived here for over a year or two, you find that you become addicted to it (I’ve been here for over 8 years now). There are definitely moments when you hate it (noise, pollution, the busy-ness, the expensiveness of everything, and other stressors), but when you leave New York, you can’t wait to get back. It’s hard to imagine living anywhere else.

My views about NYC have certainly changed since 9-11. The city has become ridiculously uptight about security. A certain amount of security is needed, but to have guys in army fatigues with AK-47s standing around Penn Station is completely laughable; as if their green/khaki camouflaged suits would blend in with the concrete and white walls! It’s all for show. I’m angry that we have a stupid president and governor. Many politicians have exploited 9-11 to take away a lot of our freedoms and to use taxpayer money on defense and security. Also, my awareness of the great divide between the different economic classes in NYC has made me quite upset. It seems to get worse everyday. There is so much greed here, at the expense of hard-working people. I see both worlds everyday. Sometimes I do odd jobs for multi-millionaires (even billionaires who have real Picasso’s and Chagall’s in their homes), and yet, I also know people who live in squats that are scraping to get by. All this exposure to different types of people makes me a better artist/musician/lyricist, so I try to respond to it all objectively, and not judge it. But, sometimes, when you see too much material excess, you can’t help but be disgusted with society.

DA: One of the mainstays of your band; Randy Jamrok has recently fled the nest to Chicago. Has it been difficult to adapt to life without him in your set up and has your sound changed as a result or is it too early to tell?

RR: We’ll definitely miss Randy because his style was unique and he was one of the most dedicated and disciplined musicians I had ever met. It will be hard to replace him. However, we did find a new drummer – Pete Hayes of the Figgs. He’s a great drummer and we look forward to playing some shows with him. I’ve toured with him in the UK, while he was playing drums for Steve Shiffman, and I noticed that he’s simply an amazing, naturally talented drummer. I’ve seen him sit-in with bands that he’s never played with before and he just totally rocks and you could not even tell that he was playing with them for the first time. It’s too early to tell how our sound will change once he joins us.
DA: What are your current musical influences??

RR: I’ve been listening to a lot of Nina Simone lately. I also like to listen to Love (Forever Changes). My neighbour made me this CD of some avant-garde classical music and I’ve been listening to that quite a bit. I’m looking to expand my musical ‘vocabulary’. Of the anti-folk scene, Cockroach is still my favourite.
DA: Your last European tour was hailed a success by both yourself and people who went along to the shows, any more plans to visit Europe on tour?

RR: Yes… I was supposed to go to the UK again in March, but a number of circumstances got in the way (serious health problems, which have now recently healed, and deep financial problems). Now, I’m planning on going in June of this year. Let’s just hope some money falls my way so I can go!!!
DA: If you could change one thing about the music industry what would it be?

RR: Hmmm… just one thing? Well, I suppose I’d get rid of the big corporate monopolies (or the quintopoly, to be fair… maybe it’s a quadropoly by now?). They have destroyed music. Business people, who think they’re creative and “know” what’s going to be a hit, have no clue as to what constitutes great music. And those songs do become ‘hits’ because that’s all the masses are exposed to. Unless the people have (the expensive) satellite radio, they have but no choice to listen to crap. And the sad part of it is, is that they do not even know what great music exists out there. If you want to hear good music, you really have to search for it, and a lot of people simply don’t have the time to go searching. The major labels are the Wal-Mart’s, Targets, and K-marts of music offering low quality merchandise for the masses.