An Interview with Laura and Amber by Lauren Jonik 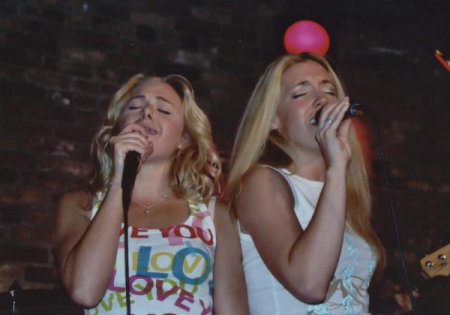 It has been said that there are no accidental meetings in life— that through each friend we make, a new world is born. Rarely do the beginnings of a friendship reveal the full extent of the beauty that the future will hold, but time and time again, the old adage is proven to be true: two are better than one.

The musical partnership of Laura Bell Bundy and Amber Rhodes had its genesis early on. Growing up in the small town of Lexington, Kentucky, Laura and Amber began to cross paths while competing in local beauty pageants as children. “Our mothers happened to be seeing each other at every event— if there was a pageant in town, we would be there. If there was an audition for a play, we would be there, so our mothers befriended each other. . . When they saw that Laura and I were like two peas in a pod, they made special efforts to hang out a lot and make sure that we went to each other’s houses,” explains Amber. Their mutual love of performing soon cemented their friendship. “Laura and I both took to the stage like ducks to water. We both loved it and ever since, we both have lived on stage. We truly feel complete when we are on the stage and when we are on stage together, it just adds to the whole equation.”

Laura and Amber came to New York City for a summer in order to audition when they were five and six year old, respectively. However, their lives soon would take separate paths before being reunited both creatively and as best friends, years later. When the Summer turned to Fall, Amber returned to Kentucky with her mother, who was a schoolteacher, while Laura and her mother remained in New York City. Laura found success in doing print work and commercials and in having bit parts in movies such as “Jumanji” and “Life With Mikey.” But, the desire to experience her high school years in her hometown led Laura to move back to Kentucky where she soon would reconnect with Amber— and unknowingly, set the wheels in motion for their combined futures. “She is one of those people that even if ten years go by, you could sit down and talk and it’s like you never lost the time. That’s the way it has always been,” says Amber, echoing the universal sentiment that true friendship stands the test of time. After graduating, Laura returned to NYC to pursue a career in Broadway theater (she would later appear in the Tony Award winning musical “Hairspray”) with Amber initially joining her for a summer to pursue dancing and musical theater, but the evolution of their friendship— and their lives— was about to take a leap forward.

Some of our most profound realizations happen in the midst of joy and in the spirit of having fun. After discovering how much they enjoyed singing and writing songs together in their apartment just for pleasure, Laura and Amber soon realized that their talents complemented each other and that they wanted to sing together professionally. Once they made the decision, as Amber describes, “there was no looking back.” A stroke of good fortune touched upon the canvas of their careers when they connected with the Brooklyn-based music production company, Stray Dog Music. When she moved to NYC, Amber got a waitressing job and one of her co-workers happened to inquire as to why she had moved to the city. When she told him she was a singer, he dared her to sing on the spot. “‘I felt compelled and sang a part of one of our songs.” Immediately blown away by what he heard, he put Amber and a friend of his who is lawyer in touch with each other. “We began working with the lawyer for a while, but he was having a hard time finding producers who wanted to take the time to develop artists. . . but then, he found Stray Dog through another connection. We came in and had a meeting and the rest is history,” marveled Amber before continuing. “It’s amazing how just one step can change everything. It can change your whole future.”

Believing in the importance of nurturing the creative process, the owners of Stray Dog Music— Axel Niehaus, Erik Steinert, Brian Callahan and Hugh Colocott— strive to develop the inherent talents of the artists they work with. “I really have a sense of family. . . Coming to New York City and working with Stray Dog, we carry that sense of family that we were raised on and adapt it to here. These guys aren’t four guys who are our production company, these are four guys who are our family that, if we have any control over it, we want to be working with for the rest of our musical careers,” says Amber. And, it is through basing their relationship on mutual respect, their musical collaborations flourish. “A lot of people want to take what they think is going to be really marketable and just mold you into that, as opposed to letting you express yourself artistically the way you want to be portrayed. Granted, they do know more than us. They’ve been in the business longer, so we do listen to them and take their criticism and their suggestions, but ultimately, they have been amazing at letting us express ourselves the way we want,” enthuses Amber. It is the unified commitment to excellence that remains the collective focus of Stray Dog Music and of Laura and Amber in every aspect their careers— from songwriting to performance to production.

Intuitive in her approach to songwriting, Amber has found that often, her best songs are the ones that flow naturally— and quickly. “The songs that come to you and take about ten or fifteen minutes to write are always the best ones.” While the writing process may differ depending on the song, Amber infuses all of her work with a sense of fun and optimism, as in “Goodbye Yesterday,” which she co-wrote with Hugh Colocott. So what if the rain cloud chases the sun down? / My day is still bright / Who cares if my love life’s takin’ a nose dive? / I will be alright / ‘Cause I’ve still got a song to sing and there is music yet to play / Hello tomorrow, goodbye yesterday. As a songwriter, Amber has discovered that the act of collaborating enhances both the process and the end result. “It helps you along in your journey. . . Everyone has their way of writing a song and the moment you collaborate with someone, you get to see what their way is and it can bring so much new life and color into a song that you would have never thought of on your own and it can be really fun.” It is this same desire to evoke joy while having a good time that both Laura and Amber bring to their performances. “You go up there and suddenly, you’re engrossed in music, where we’re having fun with each other and we have these great guys behind us in our band and you get lost in the moment and it’s a wonderful moment. . . You’re doing what you love to do.” Having their musical partnership based in friendship heightens the experience in ways that are both obvious to the audience and subtle to them. “Because we’ve been friends for so long, there is a comfort level. We know each other so well that we can predict our moves ahead of time. It adds to the enjoyment of it all.”

Standing upon the firm foundation of their friendship, looking towards their bright future, Laura and Amber are grateful for all that has come before them and all that is yet to be. “We’re both always really aware of how lucky we are,” says Amber. Blending lightheartedness with warmth, the music of Laura and Amber reflects the world their friendship has created— and openheartedly invites their audience to be a part of it. “Our music is about friendship. It is about who we are.” Indeed, it’s about the kind of chemistry that stands the test of time. You may have to back up, in order to walk thru / The other door that destiny’s opened up for you / It’s time to realize there are no accidents in life / So don’t be blind, just give it time / It’s gonna be alright! The friendship of Laura and Amber is much like all friendships— simply put, they bring out the best in each other and share it with the rest of us.