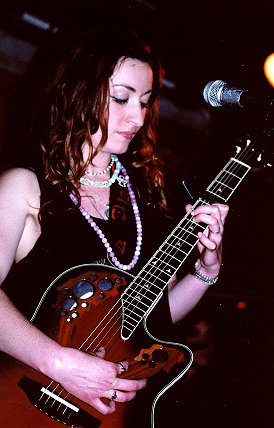 An Interview with Mieka Pauley By: Lauren Jonik

As most artists recognize early on in the development in their craft, creating is a necessity, not a luxury. It becomes a way of navigating both the world and life itself. But, the roadmap is one that’s dotted with mountains and valleys, as the endless road beckons forever onward. For Mieka Pauley, traveling on that path is something that’s more than just metaphorical. For the past several years, Mieka has spent much of her time criss-crossing the north and southeast and the midwest bringing her engaging songs and demonstrative performances to those who meet her along the way. With vocals that rise like rings of smoke into the air, her songs allude to the fire just beneath the surface. As she sings in “Bravely,” “Do it bravely, save me from the weak and lazy. If you can’t face it, don’t do it all.”

Though she has been singing since she was a child, it wasn’t until being influenced by her time in Cambridge, MA while attending Harvard that Mieka Pauley realized the possibility of performing as a profession. “When I was tiny, I remember making up songs and singing them into household appliances like they were microphones,” she recalls. Those imaginary practice sessions became real when Pauley decided to try her hand at street performing after having witnessed other musicians doing it for four years. “Being surrounded by that made the transition easier. I think street performing could be a foreign concept for people who aren’t exposed to it. The idea is that you’ve got to build your audience just on the basis of your performing because nobody’s there. They’re just walking by. It teaches you how to perform anywhere. “

And, that includes New York City. Playing frequently at The Living Room and the Rockwood Music Hall, Pauley has built a solid fanbase of familiar faces who return again and again. “Those place feel like my home since I keep going back there.” Appreciating the responsiveness of NYC audiences, Pauley values the welcome she has received. “I’m surprised at how receptive New York is, but I think their reputation incorrectly precedes them. They’re a lot more open. They’re going out and seeing music. Everywhere you look, people are at shows.”

Currently working on her new album, Mieka Pauley is pleased with how the project is progressing and is eying a late summer release. “It’s going great— I’m so happy. A friend of mine, Brian Cassagnol from the Boston band Harriet Street, is producing the album. I love collaborating with him on a musical level. It’s so great to see what he does with songs that before had not been fleshed out outside of me, “ Pauley explains. With many miles and countless hours on stage now under her belt, Pauley is anticipating that her next collection of songs will be “more artistic and more actual incarnations of my songs and music.” She states that the working on her CD has been a chance to discover what her sound really is.

“Oh to take sorrow and use it as a crutch / And have all you need and never know it as such / Oh to want the warmth of fire and get the burn of its touch. . . “ Pauley sings in “Devil’s Got My Secret,” one of three new tracks from her recent recording sessions being sneak-previewed on her MySpace Page.