Miss T and the Japanese Tourists by Dave Adair 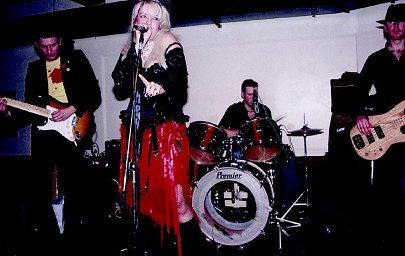 The colourful leading Lady Miss T and her three fellow babydoll punks; Gabriel – (lead guitar), Dan (bass guitar) Andy – (drums) have been mesmerizing adventurous music lovers of late, mainly in their London base. Since 2001, Miss T and the Japanese Tourists have been pouring passion; lurid provocation and musical know how into their project and much like Sven’s England they have dug out a victory against stoic opposition (indie purists) and are on the verge of being signed.

The mercurial Miss T and co took the opportunity to divulge details of their appearance on a compilation CD that is to be released soon by the good people of Chromium Records. Also, they give an insight into the battles that a talented underground band faces in this cut and thrust musical world of ours and most importantly, they entertain us with their wit and wisdom.

Since the inception of your outfit in 2001, you have flitted mainly around your home base of London dazzling audiences. The four of you have based your performances on the laudable premise of entertainment & escapism. Do you make music to escape and for your audience to escape, also is there a cathartic element to what you do?
We definitely apply the idea of ‘escapism’ to both the making of our music as well as to the effects it has on our audience. As a band we function in two very different worlds – our day-to-day humdrum of tubes, trains & aeroplanes & then our evenings cocooned away in our studio where we can escape to the world of ‘Miss T & the Japanese Tourists’. Just as we are able to lock the world out – so we want to recreate that feeling in our shows for our audiences. A place that they can come to and for ‘X’ amount of time, be transported off into the realms of their shadows to revel & enjoy for a while what your day-to-day routine doesn’t allow for & then we deliver you safely back to your reality…… hopefully a little bit changed.

You have self classified your sound as “Babydoll Punk”, how would you define this sound for the initiated? Do you still feel that this term summarizes your music or have you changed?
As Gabriel (our lead guitarist) puts it: ‘I think our ‘Babydoll Punk’ has entered its puberty and started to secretly experiment & dabble in a few ‘not so conventional’ things.’ Our music has definitely ‘matured’, we as a band have matured & grown more comfortable & confident with the idea of pushing things to the edge, even over the edge at times. Trying new techniques, being more unconventional & not giving up when it doesn’t sound right the first time or the 100th time for that matter. We definitely believe in the old ‘work hard, play hard’ ethic – although having said that it would appear we haven’t quite made it to the ‘play hard’ part of the statement! So yes, I do believe our ‘babydoll’ is growing up – but she will definitely always be there….. Somewhere.

There does not seem to a band like you around in London, so is it difficult to find bands to play with and how is your sound going down on the London scene?
No, our sound certainly doesn’t fit in with the music & look that’s being touted around various music magazines etc…. In one way it works against us as there are a lot of bands out there all trying to sound like some or other band & well that doesn’t leave us many options to choose from when playing gigs & more than often we end up playing with bands that are on the other side of the spectrum to us.

At first this was a bit disappointing as it meant we weren’t always reaching our ‘target audience’ but then we started to notice that we were starting to see more & more of the ‘indie’ crowd showing up at our gigs. This was also helped by the fact that John Kennedy (Xfm Radio) played our music quite a bit on his shows & then we did some recording with Gordon Raphael – the man who discovered, signed & produced The Strokes 1st & 2nd albums – which also brought us to the attention of the ‘now’ crowd. The good news is that we believe everyone has a dark side, even ‘indie kids’ & well those of them willing to give us a listen to might be very surprised! We want to use our sound as a medium between people’s conscious and subconscious worlds, as a gate to their imagination. We want our songs to be paintings from Hieronymus Bosch, disturbing & unexplainable at first, but luring one to come closer. We don’t discriminate.

In my humble opinion your best number thus far is the bold and provocative Blondie crossed with Bjork and splatter of Maddona number ‘Little Girl’. It appears to have a serious message about exploitation do you intend to educate as well entertain with this number?
Educate, entertain, warn and tempt to be precise.

You seem such a close knit quartet. How do you resolve creative differences?
By using them. Coming from four totally different music backgrounds allows us the creative freedom of not ape-ing the style of ‘our common Idol'(with the exception of Billy),these differences becoming thus the advantage. We have a tremendous amount of respect both musically & personally for each other. Each idea, opinion, comment is tried & tested before we all decide which direction the whole unit will progress to.

Describe the songwriting process for Miss T and the Japanese Tourists do you all collective input or is each song the brainchild of one member of the group?
In 99% of the songs Miss T is the one who throws the spark of melody or lyrics and the rest of the band just catches the fire. Sometimes the song is the product of ‘innocent’ jamming in the studio & sometimes one of us will come with a riff or a beat & we will just work around it until something develops that we all fall in love with. We fall in love quite a bit!

You seem close to getting signed and have contributed a song to a compilation album released by Chromium Records. This is a celebration of material from a variety of up and coming bands. What song have you chosen to put on this album and can we expect a debut single anytime Soon?
The song being featured on the compilation ‘Showcase International’ is called ‘Killing me’ which has been produced by Gordon Raphael. With regards to a debut single being released we hope that the snow-ball effect will cause an avalanche with a debut single landing on your lap in the near future!

What are your current musical influences ?
As different as the past ones, anything from Buddy Holly to Marilyn Manson. Having said that the whole band went to watch Interpol at Brixton Academy this weekend – who we are big fans of & apart from the sound being rather dire we thought they were great.

Many indie & alternative bands are hypocritical in their criticism of manufactured boy and girl bands, as they are manufactured themselves with the use of drum machines, pre-recorded vocals and guitars. However, this cannot be said of you, so go nuts?

So you’re saying that Depeche Mode are manufactured? There is only good (honest) music and bad (pre-calculated) music, the means are irrelevant

How keen are you to exit the congested capital for a while and take your energetic live shows around the country on a full UK tour? How do want to leave people feeling after witnessing one of your live shows?
Very keen indeed. We would love to get out there & ‘spread the word’! After witnessing one of our shows we want the audience to feel as if they have just been privy to an accidental peep through the key-hole of a forbidden chamber. Exhilarated, breathless, turned on & above all at peace with their darkness.