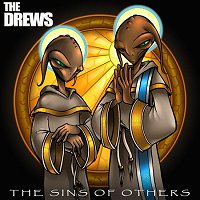 Album Name: The Sins of Others
Artist: The Drews
Year/Label: 2005 / Independent
[Buy at Amazon]

When I heard that The Drew were labeled Rock-Country-Blues-Folk I was not expecting something I would like, since Country and Blues are two genres I don’t care for. Then for some reason the cover art made me think it would be rap or hip hop. So things were not looking good for The Drews getting a positive review from Collected Sounds.

Luckily, these things didn’t matter once I put the CD on. The sound is indeed country-ish but also has this pop sensibility and is humorous in the way the Gear Daddies approached country music (I’m still a huge fan of theirs). I might call this alternative bluegrass or something like that. I don’t hear real blues, thank goodness.

This is their second album. Their first being Strategically Interrupted Silence, in 2001.

The vocals on “Not So Near To Here” are a combination of Johnny Cash and Brad Roberts (from the Crash Test Dummies).

The country roots show in the lyrics as well, they have a lot of words ending with in’. “Make Me Scream” has some pretty suggestive lyrics…yes, it’s about what you think it is.

“The Sins of Others” is a fun ride. I mean, you gotta love a band that has drinking songs, right? Or is that drinkin’?