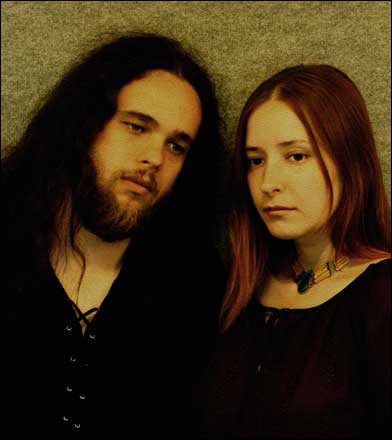 You seem to get your inspiration from times past..is there any time period you’d like to visit if it were possible??
Yes you are right. Our music and lyrics are inspired by times bygone and long-forgotten. If it were possible it would be really great to visit the medieval times. I’d love to visit a contemporary musical “festival” held at a court, listening to bards singing and playing harps and lutes, telling tales in the universal language of music.

Are there any other groups you feel close to?
Yes, bands and artists like Hagalaz Runedance, Loreena McKennit, Louisa John-Krol…etc

How did the group start?
The Moon and the Nightspirit was formed in 2003 by Agnes and me. In the beggining it was only a side-project, a musical experiment of ours, not a full-time band, due to the fact that we were members of a hungarian gothic metal band (Evensong) at the time. We’ve been always interested in the pagan culture and wisdom, the spiritual and musical heritage of our ancestors, the long-forgotten tales of the old, and after writing a few songs for The Moon and the Nightspirit we realized that this was the music we always wanted to play, the path we’ve been searching for all the time, the world where we truly belong. So we decided to quit our former band in order to pull all our efforts and emotions into The Moon and the Nightspirit. In 2004 we recorded a promotional EP, which gave us the record deal with Portuguese Equilibrium Music. In the summer of 2005, after a short song-writing period, we entered hungarian Elysion studio again to record our debut album “Of dreams forgotten and fables untold”.

What’s your audience like?
Well, as i take it the audience consists of quite various people from the younger to the older age-groups. We do believe and hope that our music can reach the heart and soul of many people. Of dreams forgotten and fables untold is our first album, and we had only one live show so far. We are only at the beginning of our journey.

What’s the music scene like where you live?
Hungary has a strong music-scene, with a lot of talented and young bands. Unfortunately only a few of them had yet been given the opportunity to be known outside of Hungary as well. But let us hope it will change soon. Sadly the lack of independent labels and magazines in Hungary is a factor that will surely not help the fast progression.