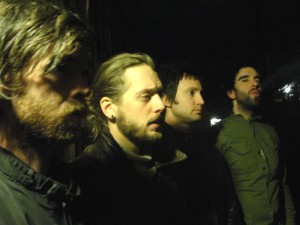 Panama Gold is a rock n’ roll quartet based in Seattle, WA*. Their collective sound celebrates the highs and lows of 60’s garage rock and late 70’s post-punk with the vocal delivery and soul of early Rolling Stones, Doors and Stax recordings. “We fancy ourselves as being a band that goes outside the constraints of formulaic songwriting; but at the same time, we want your grandma to like us, so we adhere to certain pop song structures,” states lead vocalist Damien Goyenechea. Panama Gold’s high energy sentiment, songwriting and stage show are equally rooted in the moment. And what a moment it’s been: In less than a year, Panama Gold went from an idea of songwriter Goyenechea, to forming their own label Madcap Records, releasing several singles, an eponymously named EP and playing dozens of well-received shows at Northwest venues such as The Sunset Tavern, High Dive, Slims, and Hell’s Kitchen. Panama Gold has begun to cement their notoriety around the Seattle music scene; if the past is any indication, the months to follow will be equally fleeting. An LP is slated for release in June 2010 preceding a West Coast tour.