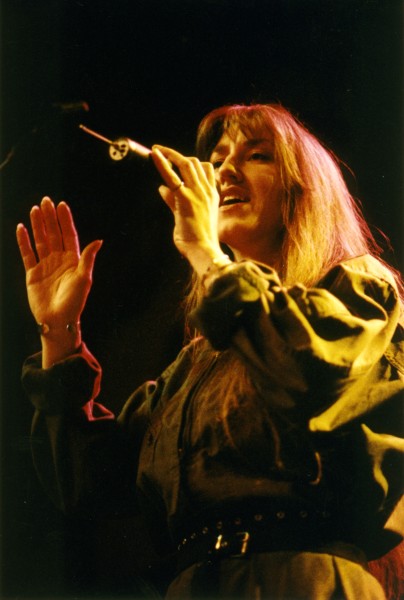 Happy Rhodes is an enigma. This is according to the Music Industry, which has never been able to pigeon-hole her into any category. Her music is otherworldly yet substantial and her 4-octave voice has a haunting familiarity to it. Most listeners find her work difficult to describe and yet she incites an almost unheard of devotion among her fans. She goes from Kate Bush highs to David Bowie lows and you find yourself being beckoned to follow her into her futuristic worlds. She was born on August 9th, 1965 and named Kimberley Tyler Rhodes. Three days after her birth, while still in the hospital, her brother Mark called her “Happy-baby” because she was so smiley and he couldn’t pronounce Kimberley. It seemed so fitting that it stuck. The family never knew her as Kimberley and so when she was 16, she made it her legal name.

Note: Happy’s music has so inspired people that an entire online community called Ecto is now in place. It began as a place to chat with others about Happy’s music but has grown into a huge mailing list where the members talk about Happy, yes, but TONS of other artists as well. This is where I have learned more about female musicians that anyplace else. This list has been invaluable to me (not to mention tough on my bank account)