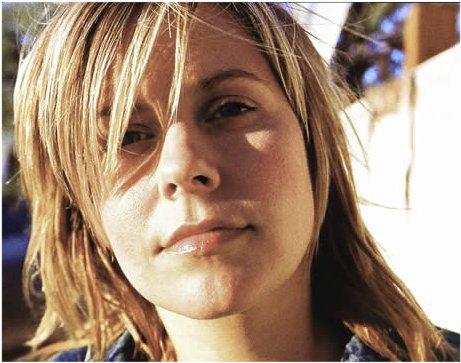 Marie Frank was born on August 28, 1973 in rural Denmark. She began playing the guitar at age 10. She took guitar lessons from a local teacher then joined a girl band when she was in high school in Denmark.

She moved to the town of Randers and made some musician friends. When Randers wasn’t offering all she needed, she packed up her guitar and hitchhiked through Europe becoming a street musician. After playing many gigs and putting together a demo, BMG Records took notice and signed her.

Her inspirations are quite varied as she names, Janis Joplin and Joni Mitchell as well as Bob Dylan and Lou Reed.

Her CD “Ancient Pleasures” was released on August 29, 1999 in Denmark.

She also has a fabulous web site where you can hear bits of the entire CD and watch a video.
(info taken from Marie’s Official Site)

Read reviews of:
[Where The Wind Turns The Skin To Leather]
[Swimmingly]
[Vermilion]
[Ancient Pleasures]