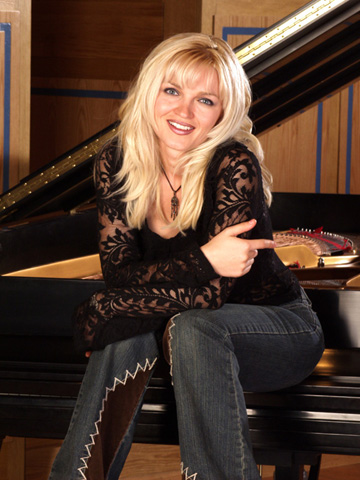 Pianist/composer/entertainer Oksana Kolesnikova, was born in the city of Barnaul, Siberia. She came to the US when she was 15, (ten years ago, as of 2004) Her parents wanted to give a better future to their children which include Oksana, a younger brother and a younger sister.

When asked how she got interested in music she says, “I can pinpoint the exact moment I fell totally and forever in love with music. I was five years old, and my father, mother and I had just moved from Siberia, in far-eastern Russia, to Kazakhstan. That’s where I first went to school. And it was then that one day I noticed a beautiful young woman seated on a bench, hands flitting like birds across black and white piano keys, music pouring seemingly from her fingertips. I was transfixed. When my father came into the room and saw me watching the pianist, he positively beamed.”

A week later, she auditioned and was accepted to a local music school. There she practiced three to five hours a day. When she came to the US she was trying to decide what career to pursue. She wanted to make it music but felt she ought to do something a bit more practical such as medicine. Her answer came at church when she asked for guidance and heard beautiful piano music. When asked if she regrets not going into medicine she says, “I think some people are alive today because I didn’t pursue it.”

She has since graduated with honors from Florida State University.

Though she plays classical, blues, rock and pop, her musical influences are the classics especially Rachmaninoff and Tchaikovsky.

“When I play or learn a new classical masterpiece, I enjoy the thrill of mastering the difficult technical passages and discovering new messages hidden between the notes. I love listening to symphonies and concertos because, every time, I discover a new meaning or interpretation that I missed before. It’s like reading the novel, where you will get the whole concept right away, but the details will come after reading it over again.”

Final quote:
“I can play anywhere, even on the moon. I’m a people pianist. As long as I’m connecting my music with people, I’m happy.”