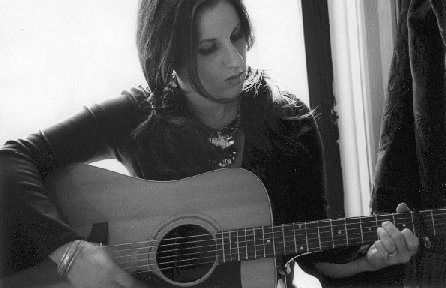 With the release of a new 11-song compact disc, “This Is Mine” (Enchanted Records), the music of Stacie Rose is began to attract major attention. She appeared on national TV singing the chorus of Simon & Garfunkel’s “America” in August of 2002 when ABC-TV launched a campaign for Peter Jennings’ six part series “In Search Of America.” “Mine”, the title track from the album, This is Mine, was utilized in an AMC promo campaign the entire month of March 2003 on American Movie Classics, while “Shine” – the third track from her disc of all original material – found itself in the independent film “Closing Time.”

Born and raised in New Jersey to music loving parents the New York based singer grew up surrounded by song. Sounds of the Beatles, Billie Holiday, Billy Joel, Frank Sinatra, and the Bee Gees – from jazz to folk to classic rock these impressions steered her creative development, so much so that the future vocalist/writer began playing and singing at an early age.

In her college years Rose bought a guitar in a London pawnshop, the instrument rife with rebellious bumper stickers served in putting her thoughts and ideas into musical form. She started The Stacie Rose Band as soon as she graduated Ithaca College, and a rep from, Maverick Records, liked the songs and the voice, but not the heaviness of the group. Stacie knew she wasn’t in the right place or the right situation, so she went back to square one, wrote more songs, and on a quest for someone to help her shape her sound.

Robert L. Smith was one of a half dozen producers who came to see Stacie live. Having cut his teeth on helping such singers as Mariah Carey develop their sound, he knew what was needed to get Stacie’s songs the attention they deserved. Surrounding her with some of NYC’s best musicians proved to be the key to retaining a simple and clean elegance.

A gifted artist with many talents, Stacie Rose has the intuition and drive to not only create great pop tunes which future generations will love and cherish, she has the potential to develop a wide audience as the music unfolds, fans experiencing music that corresponds to the recordings live, never copying exactly what the musicians and she crafted before. The mainstream needs something to move people and bring some harmony, heartache, and maybe a little hope and joy into their lives – and that’s what Stacie Rose is expressing, continuously challenging herself and the musicians performing these original tunes, sharing her individuality with colleagues and audiences. It’s a mission that Stacie achieves with a simple elegance that has already garnered appreciative reviews.

Stacie is not a product of the studio. A real singer and writer, and performer, her most recent project, ‘This is Yours’ is a prime example of an artist in touch with what What it takes to transform studio perfection to live energy. Originally intended as a document for personal use, the performances captured, along with endless requests from fans, demanded the Recordings to be released.

Read reviews of:
[Shadow and Splendor]
[This is Mine]
[Shotgun Daisy]
Discography