Sucreabeille:
It translates to Sugar Bee. And it’s a perfume company, owned and operated by a group of wonderful women. This is not a post about music or podcasts (well, not directly anyway) but I wanted to highlight this fantastic company so here we are.

A friend suggested them to me because they have a line of fragrances named after My Favorite Murder (podcast) quotes such as “You’re in a Cult, Call Your Dad” and “Here’s the Thing, Fuck Everyone”. They also have lines for Supernatural, Firefly, Game of Thrones, and Golden Girls to name just a few.

How does a perfume company sell fragrances to people who can’t smell them before buying? Glad you asked. Another amazing thing about Sucreabeille is that each scent has its own page with not only scent notes (what it smells like) but a blurb about the nature of the scent. Sometimes it’s a short paragraph, sometimes it’s a full story. Here’s an example of the description for “Here’s the Thing…”

You come home after a long day: you somehow ground dirt into your white shirt (HOW?), your friend ditched you, and the train held up your commute for 30 minutes – AGAIN. Now as you lay down to turn on some murder documentaries some asshole is knocking on your door, pleading with you to use your phone because their car broke down, and you don’t see a car in sight. So you leave them knocking, call the police, and turn the murder documentaries up to 11 after slipping on this rich scent of rich dark chocolate, dirt (yes I said dirt-trust me guys), and amber and tucking in with a nice shot of bourbon. Because here’s the thing-fuck everyone.
Scent notes: Bourbon, Rich chocolate, Dark amber, touch of dirt

I have that one, it’s the first one I bought, and it remains one of my favorites.

They come in wee sample sizes (the two little ones below) for $6 each so if something sounds like you might like it, you can get a tiny one and if you don’t like it, you haven’t wasted too much money. Also, there is a Facebook group of fans of these scents (yes, there IS a Facebook group for everything) and occasionally they do swaps. So you could get swap it for one you already know you like at a later date. But you’ll probably just like them anyway.

I now have placed eight orders counting my recurring monthly subscription and there are only a few scents I don’t like out of the 34 scents I have.

Also, these are handmade in small batches so they’re “fresh” when you get them. So sometimes letting them sit for a week or so changes the smell. They also smell different on skin vs. in the bottle. So, some that smell terrible in the bottle smell really nice on my skin. They’re going to smell different on different people too. I don’t pretend to understand the science behind perfume making. But I’m enjoying the results.

I like to put them in my essential oil diffuser. Some smell great like that, some are better on the skin. I also have a diffuser bracelet and that’s a nice way to smell it all day.


Below is my latest order. It was a mystery bag so I had no idea what I would be getting. I think it’s probably either new scents that are not out yet or retiring ones. I’m sure it said so on the card, but my dog ate it before I read it. 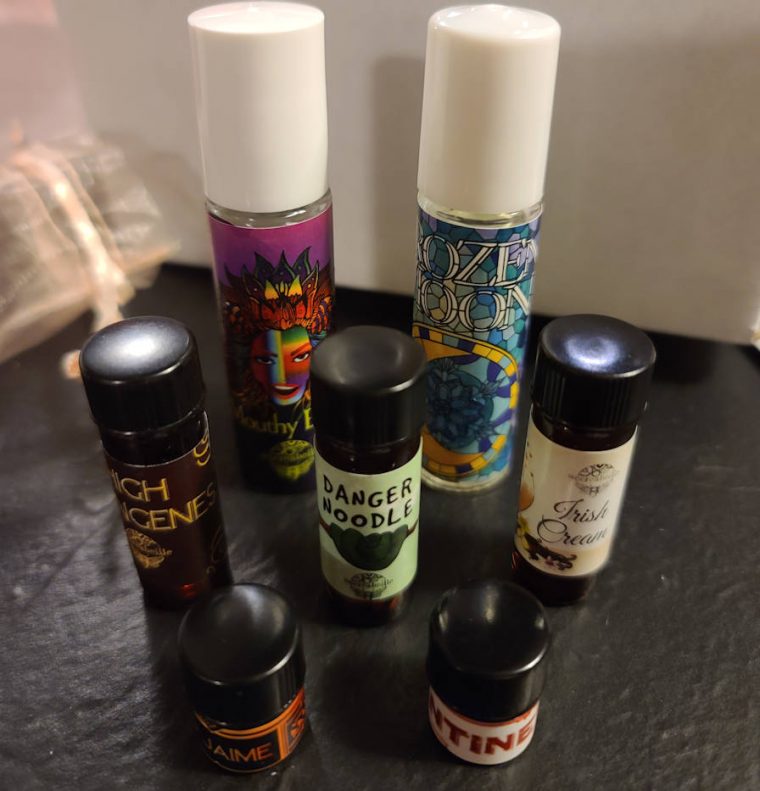 The order contains rollerballs of Mouthy Broad and Frozen Moon (I like these both, the latter better).
Drams of:  High Strangeness (not for me), Danger Noodle (nice and light, doesn’t stay on long), and Irish Cream (another one not for me, it’s soooooo sweet. It might dry better than it smells in the bottle).

Samples of Jaime (Game of Thrones line) and Byzantine (I LOVE both of these, Jaime is my favorite of this batch).

I’ll keep posting on social media when I get orders I hope you try them out!

Note while I am an Amazon affiliate I do not have any sort of relationship with Sucreabeille, I just love them.

Check them out here: Sucreabeille.