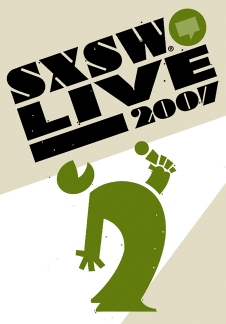 This is great news for those of you, like myself, who have always wanted to attend this great festival, but haven’t been able to do so.

Los Angeles, CA â€“ August 21st, 2007 will see the release of SXSW Live 2007, the first ever DVD release of the influential and continually growing festival. The DVD was recorded in March 2007 at SXSW in Austin, TX and contains 18 outstanding performances from the event. SXSW Live 2007 including a mix of cutting edge and established artists, including The Bravery, Aqualung, Peter Bjorn & John, Razorlight, Polyphonic Spree, Rachel Fuller with Pete Townshend, and Rickie Lee Jones.

During SXSW 2007, Blaze TV, a Shout! Factory company, custom-built two clubs where performances were captured in multi-camera HD with 5.1 surround sound. The Lone Star Lounge had a traditional Texas feel, while The Bat Bar was designed as more of a modern music club. Both clubs were built from the ground up inside the Austin Convention Center.

This unique musical experience was broadcast by DIRECTV as a groundbreaking exclusive three day 24 hour live concert event. The best of these performances are included on SXSW Live 2007, along with exclusive artist interviews and backstage footage.

SXSW began in 1987 in Austin, TX and was attended by 700 people. Now featuring hundreds of bands on over 50 stages, SXSW is attended by approximately 10,000 people from all over the world, and continues to grow as an event where creative people can experience great music, share ideas and build their careers.