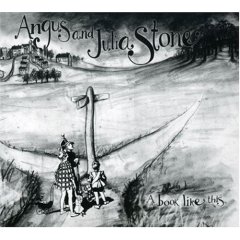 Recently comedian, Dave Gorman valiantly tried, but painstakingly failed to perform the laudable task of traveling through America using only the goods and services of the independent man or woman, completely shunning “The Man”. His next challenge, should he choose to accept it? Would be to tour the world, taking in only sincere, independent, honest, grafting and “in it for the love of it” musical acts. His quest would surely start with these roving, thought provoking, cushioning and prolific antipodeans who are brother and sister pairing of Angus and Julia Stone (or at the least they would be the stop just after The Fiery Furnaces).

This pair shares out the lead vocal duties almost as equally as they no doubt doled out sweets between them when they were younger? Angus opens up with a stirring and spirited folk vocal nudge featuring an endearingly laboured lag, The Beast. Immediately, through subtle guitar stirring and Julia’s Bjork-esque atmospheric backing, you’re lured up into a space above our world where both you and they can sit in judgment on violence and selfishness.

The main difference between this foraging debut full-length and their back-catalogue of explorative E.P.s creeps out in ‘Here We Go Again’. Whereby, Julia’s lead vocals swap crispness for a low-key, bedraggled touch. In this particular case it is the ravages of the aging processes that are dissected with an age-defying wisdom. However, it is midway through this album that the Dave Gorman inspiring lyrical bite takes on a life of its own, ‘Hollywood’. With a little help from Julia’s new found maudlin way of projecting bemusement;

“I blame you Hollywood for showing me things you never should…They all would have been killed In the Sound of Music la da daa la da daa, The Little Mermaid she wouldn’t have made it to shore; he would have married a whore from a wealthy family….Cinderella would’ve scrubbed those floors till her hands grew old and tired.”

The temptation at this point, is to switch off before you’re told that E.T. would have joined the Republican Party, but the scything cynicism doesn’t swipe out that far. The lobbing title track mingles sentimental poetry with a winding accompaniment, showing a bluesy slant that suits their life bearing lyrics and the yearning projection.

A haunting harmonica has a stark impact against the subtle backdrop of the rest of the album and makes Stranger, engaging and it ups the tempo a notch. Piano prominence gives mystique to Another Day, as pounce and a lurid touch is imparted by the vocals to show up an adventurous side. Angus and Julia Stone take a refreshing approach to their trade and have produced thirteen tracks that show wisdom, spirit and independence.