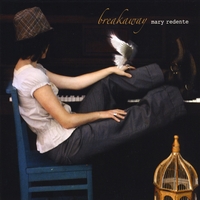 Maybe it’s the press that came with this (with a warning about how much I’d like it) but something clicked before I even heard this and I had a good feeling about it.

My first impression on hearing it, (Happiness in Action is the first song I heard) is that her voice is a little different. Maybe it’s partly because the last album that played was a really soft sweet voice. It’s a great voice, just different. This is a very cool song, and a good pick for the opening track.

As I’ve mentioned before, when I review records, they all go into a folder and I shuffle it taking notes whenever something hits me on a particular song. Well, The Best, had caught my attention three separate times. Whoop, make that 4. I guess its safe to say it’s my favorite song on here.

I also like Happenstance, which highlights the piano a little more.

There are times when her voice strays into the more bluesy realm, and let’s just say that’s not my favorite genre. But as a whole, this is a good album. It’s a little short at 7 songs, but it’s a nice record.

Track Listing
1. Happiness in Action
2. Down By the Water
3. Happenstance
4. The Best
5. Evolve
6. Consequences
7. Penny for Your Thoughts