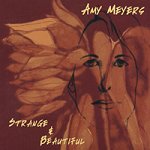 This is Amy Meyers’ fifth (fourth solo) CD. Her third solo recording, The Crossing, was reviewed here on Collected Sounds almost exactly one year ago today by Anna Maria Stjärnell.

Meyers’ has an Alto voice that slips into falsetto occasionally giving it a unique lilting quality. She is accompanied by several instruments but mostly piano and acoustic guitar.

I especially like “Good” it’s funky and fun. “Girls Like You” also has a lot of personality. It’s a cute song about falling for the wrong person.

For the second half of the CD she makes use of piano as well on a couple of songs and it sounds great.

I think “How Long?” is my favorite track here. It’s one that stuck with me upon first listen and when I heard it again it felt like an old friend.

One thing that stands out is how each song is really different. They almost sound like different genres. The CD starts out sounding like straight up folk. But then a pop song “pops” up. Later comes an adult contemporary piano ballad, then when you get to track ten it almost sounds like jazz, while the next track, “Spring” borders on classical complete with strings (and is beautiful).

While this was playing and I was working, I kept stopping what I was doing to remind myself which CD I had in, because I thought perhaps I changed CDs without realizing it.

Because there are so many styles in one, maybe only open minded music fans will love every single song, but there is something here for everyone. This is a really nice CD.

Her voice reminds me of someone else and I can’t place it. I think Merry Amsterburg at times, but there is something else there and it’s driving me batty. Especially on song 4. If anyone can help me, please before I lose my mind, , go to CD Baby and listen comment here if she reminds you of anyone!