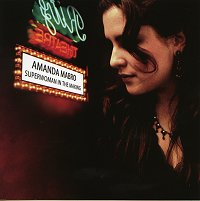 I reviewed Amanda Mabro’s previous release, One Fine Man. My favorite of the three songs on that EP was One Fine Man so I was glad to see if was also here on this full length. Swing with Me was also on the EP.

I really enjoy Amanda Mabro’s torchy voice. It’s perfect for the genre, which it somewhere around cabaret and jazz with a current touch.

These songs are well written and really fun. I keep wishing I were sitting in a club seeing and hearing this live though. The production is very good; it’s not that, it’s just that this music has a theatrical air to it that I think would play very well live. It’s kind of transportive….is that a word? It transports me to another time and place.

I was looking forward to a full length from Mabro and I’m glad the time has come. Very nice record.

Rating: 5 Stars
Comment: Amanda’s music and voice is one of a kind, the words and music are so true but yet imaginative, One fine Man is a fine song, but the song Lonely days is my favorite one. Amanda will climb very high one day if she hasn’t already, don’t miss her shows..they are extremely good
name: Perry on Thursday, March 16, 2006

Rating: 5 Stars
Comment: Hi folks, I was waiting for this album to come out as well. I just got a copy from Archambault, a local store in Montreal, and it turns out the album is really great! I’d have to say my favorite song on it is probably Faulty Plans. Gives me that whole “mysterious 30’s movie theme” feel. I have to say that I understand Amy Lotsberg’s point of wanting to see them live. Their music does have a very theatrical element to it. As well, seeing Mabro drown into her own world while she sings is amazing in itself. It helps me not feel stupid for wanting to do the same thing. There’s something so mezmorizing about their music when they play that you can’t help but fall into another world within yourself… One where your imagination takes control and your thoughts and worries don’t matter anymore. I also like the fact that this album gives you confidence in understanding that you’re not alone with your problems. Mabro confronts them and makes them seem so easy to deal with in the grand sceheme of your life. I give the album 5 stars. However, I give their live performances a 6… if that actually counts for something 😉 Mr. Octave.
name: Mr. Octave on Monday, March 13, 2006