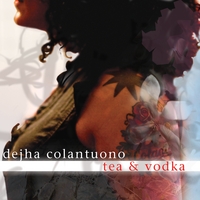 Dejha Colantuono was raised in a musical family, her parents were jazz musicians. She plays a bevy of instruments and has a distinctive gutsy voice.

This is far from mainstream pop. So while I wanted to be sure to cover it because I like things that are different and applaud folks for doing something out of the ordinary. Especially when the result is this good.

Beginning to End has some cool dissonant sounds here, which is always nice when listening to a bunch of music in one sitting. I guess that’s what I like about this whole album: it’s ear-catching because it’s not what I’m used to hearing.

I will say that she covers several styles here, so to some, it might seem a tad schizophrenic. But I like it when not all the songs sound the same from a particular artist. We go from Waltzes to harder rock in just a few songs. Not all artists/albums can do that successfully.

Feel You’re Going Nowhere is really cool. There’s a weird 80s echoey thing going on during the chorus.
It’s reminding me of a song from that era, but I just can’t place it.

Her voice really is wonderful. She’s gutsy, sultry, yet can belt out those crystal clear notes on the more melodic type songs, like Miss Fortune and Waltz for Lucy.

The more time I spend with this record the more I appreciate it. It’s been in my rotation for months and I have had a hard time finding words to describe it, and perhaps still do. But It’s different, it’s refreshing, and I like it.

← Free Ep from Trentalange
Album Review: And How! By Weather Pending →