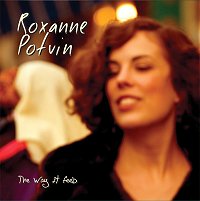 I don’t generally like blues. Approximately once a week I get a CD submission from someone who says, ‘I read your website and I see you don’t like (insert whatever I said I didn’t like: blues, Christian, country), but I think you’ll like me.” Mostly this is not the case. I just don’t care for the genres in general. I like Bonnie Raitt, but I don’t like anyone else doing that even if they sound just like her. I can’t explain it. I just don’t. However, this one is breaking me a little on the blues thing.

“I Want To” is very bluesy, but the lyrics and the style of the song are so appealing I can’t help smiling when I hear it. It even sounds a little rock-a-billy (which I don’t dislike at all).

“Hurting Child” and “Don’t Pay Attention” remind me of Norah Jones and they are both very nice.

“Caught Up” has that 50s sort of swingy thing that I can’t stand. But the melody is so catchy and cool, I am warming to it. I feel like if this very song were done in a different style (genre) I would love it.

Well, I’m not going to go through every song, I’ll just say that I like this way better than I expected to and that’s a nice thing indeed. I think the reason this warmed my cold blues-hating heart is that these songs are just damn well written. They melodies and the lyrics are just impossible to ignore. Oh and it doesn’t hurt that Roxanne Potvin has a great voice that is more than competent in all styles presented.

There are certain aspects of it that I still don’t appreciate like I should, but all in all this is a record that even blues dislikers (haters is just an ugly word) will enjoy.