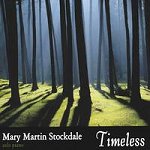 There isn’t a lot I can say about instrumental piano music. If I were a composer my self, I am sure I could comment on the measures, the meter, etc. But I don’t know a lot of music theory so I am not equipped that way. I can’t comment on the lyrics or the voice because there isn’t any. But I can say that this recording is very relaxing and lovely to listen to.

I have long been a George Winston fan. I listened to his music while I was studying, sleeping (sometimes both of those things at the same time) or just relaxing. Stockdale’s style is similar to Winston’s. I feel like this music is perfect for playing during a nice romantic dinner, or for just lying down with your eyes closed and hearing every note.

Stockdale’s prowess on the piano is apparent, even to non-composers like myself. The music is lovely. It’s like the soundtrack to a dream.