The Tommys ::An Interview by David Adair 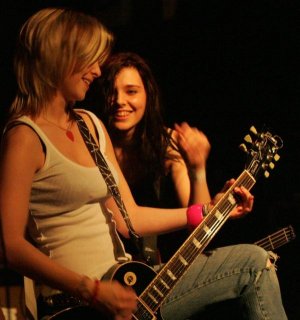 They’re Waiting In The Line To See The Tommys.

“It’s not about that they’re girls; they can fucking play!”

Responds Stevie Shepperson, the blonde streetwise mouthpiece of the Nottingham originated and Crewe based rock engine, The Tommys, concerning the impression they wish to leave upon those exposed to their live force. An alleyway in Crewe, situated between a nightclub and a cinema leads to the retreat where the girls capture their eclectic brand of garage rock, post-grunge, old fashioned R N’ R and ripping indie, then they put it into mood mixing demos. The trio recline into the available chairs and sofa, appearing as though they are ready for anything and nothing fazes them. The gals now appear unburdened after the swift departure of singer Jess Bell, smack bang in the middle of a long and reputation enhancing tour. The remaining trio of Stevie, percussionist Fran Robinson and bassist Anna Naberrie share a focus;

“We still wanna get rich!”

Stevie assuredly unfurls the impact of this recent fait accompli and hints at the reasons for it;

“If you’re not 100% dedicated it can be very difficult. You have to spend a long time away from your family, Jess just decided that it wasn’t for her anymore. By the end of the tour we’ve changed.”

The solidarity starts to kick in as Fran confidently elaborates, supporting the singer as she does in the group, with skill, confidence and utter belief;

“We have been tighter, both on and off-stage. We spend more social time together, whereas, before we used to split up into two pairs a lot. We have had time to jam, but we have not written any new material as a three piece yet.”

Prior to the recent tour, the last thing The Tommys did as a quartet was to record a broad ranging demo, both in musical approach and emotional impact. This builds around the brazen, defiant, pumping and popular set opener ‘You’re Not The One’. In less than a month this has now been re-recorded using the vocal pull of the new singer and, already the Queen Adreena hugging ‘Waiting In The Line’, has a more drawn out vocal trail. This is signposted by the cajoling and accomplished drumming of Fran. The punk laced ‘Freakshow’, now has a provocative singing sling that is fired off by the enveloping bass of Anna, it has been lifted up in potency and spice.

Anna captures their renewed enthusiasm and desire to keep the momentum building;

“We think that the demo we’ve just recorded with Stevie’s vocals on it, sounds different and we like it. I think she has a great voice. We now need to see what other people think of it.”

Fran picks the right moment to impart a fresh perspective on the matter, taking the opportunity to expand upon this and their future plans;

“Especially people who are not used to hearing Jess’ voice. A live CD has definitely been talked about, I think the live sound is very important to a band. Too many bands don’t really do anything when they play live.’

What about the immediate future?

“We’re happy to just keep gigging and stay away from the media circus. It is so easy to get caught up in all that. ”

To which Stevie adds;

“They force bands don’t your throat these days, it’s more about markets and it’s a load of rubbish. If people start thrusting it down your throat then you get sick of it.”

Previously, the song that stood out and summed up The Tommys’ steadfast and cutting nature was ‘Gagged & Bound’, but several songs have now stepped up to match this. After a contemplative pause, Stevie seeks to blow away the cloud of doubt surrounding this particular pearl;

“It had been in the pipeline for a long time, it is quite old and we had a lot of time to do it in. Loads of ideas just came into one, really.”

“Some of the songs that are better to play suited Jess’ style. We’re just growing more and more and we still want to sound pure, so that is why some of the songs naturally sound different now.”

Maybe it is this sort of honesty and genuine nature that has helped their popularity? This, according to Fran, is very important to them;

“It really helps to have a following. Ours is in the Stoke, our gigs at The Sugarmill are always packed, it’s great, and we play to 400 people there each time. We always tend to go there at the right time. The crowd in Glasgow are also good to us. We do notice that the further south we go the tougher the crowd gets. They tend to watch more carefully, for some reason.”

Speaking of the live experience, it is now time to dig up their roots. With all the talk of classic bands reforming, who would they pay to watch if they got back together?

Fran; “Kiss, I think. Especially to see them in all of the make up.”

There is a brief, contemplative pause before Stevie is cajoled into a response;

I think this gives a broad enough hint regarding their musical base. It also explains the live power that they possess and they are more than capable of capturing this on record, in true indie fashion. This is done without the aid of lush production techniques that often has the impact of blurring a band’s vision and authenticity.

With the time of their departure to Basingstoke looming, to rip up the town with one of the customary explosive live shows, it is time to delve into their current feelings. Which one of their song sums up their present mood? Stevie takes little time in fielding this one;

“Out Of My Head. It is fast and pumping and, yeah we are all out of our heads.”

For Fran it is;

“Freakshow, you go through that stage life, coming out of the reality of I know where I am in life. The song is all about that, really.”

“All the songs mean different things to different people. That is good, I think.”

So, there we have The Tommys, who have resilience and an ability to retain focus through the sort of diversity that would see most bands crumble at the mere prospect. They have evolved into role models for a bemused generation that needs focus and drive. The girls have the blueprint in their hand to prove that success and recognition can be achieved independently through skill, hard work, resilience and raw talent. Many will be watching and praying that they succeed.