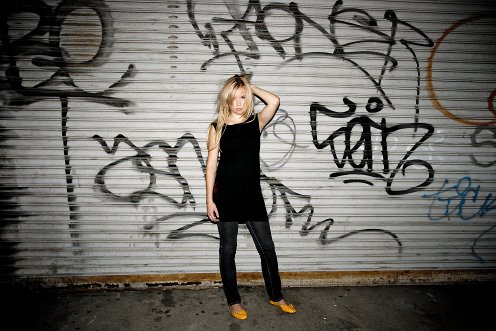 This came across my desk today and I like to try and post free mp3s for you whenever I can. I listened and it’s lovely.

Kendel Carson shows she’s quite a pistol on her new album Alright Dynamite, out June 23 on Train Wreck Records. A magnetic 24-year-old with a honey-dipped voice and serious fiddling chops, Carson demonstrates spunk and sultriness on the album’s 14 tracks. At times flirtatious and bawdy, at others wistful and reflective, on the new album Carson demonstrates an exceedingly confident spirit, building upon her 2007 debut Rearview Mirror Tears, named one of the top five Roots albums of the year by Q magazine.

Produced by legendary songwriter Chip Taylor, who co-wrote 4 songs with Carson and penned 9 others for the album, ‘Alright Dynamite’ highlights include the slinky boogie of “Belt Buckle,” on which Carson declares “pour some water on me, it’s too hot for me here” as she receives sultry stares from a good looking admirer; the rollicking “Seven Shadows On My Golden Roses”; the back porch feel of the breezy “Ooh That Dress”; and a foot stomping, hoe-down take on the Janis Joplin classic “Mercedes Benz.”

Kendel Carson will perform her boot-shuffling, bone-rattling rock and roll as a duo with Chip Taylor at New York City’s The Living Room June 1st.