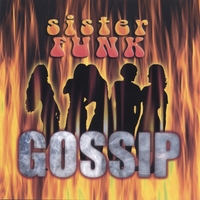 As a rule, I don’t like “funk” music except for the about ten minutes when Ani Difranco became a funkster and I tried to keep up with her before I gave up. So when I saw the name of this band I kind of did a silent “oh no.”

But my guess is it’s not really funk. Or at least not old school funk. But what do I know? To my ears it’s really more dance music. But not dance, like electronic dance, like almost 70s dance on some tunes. More rock on others.

I will say that lead singer, Denise Troy has a good voice but it sometimes sounds like it belongs in another genre.

Maybe I don’t know what I’m talking about. I don’t know enough about this genre to pretend like I do by comparing it to those who came before them, etc. So I’ll just shut up and say, ‘It’s pretty good party music’. But someone who is more familiar with this genre would be a better person to turn to for an expert opinion.

← Album Review: Big Wind on the Way by Holly and Jon
Mini-Review: State of Grace III by Paul Schwartz →