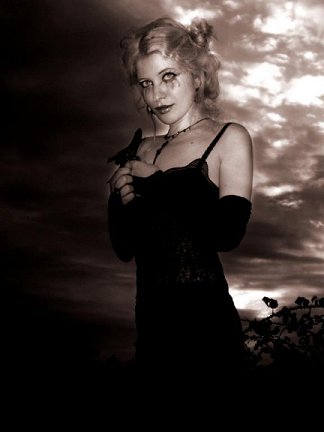 Ethereal gothic singer-songwriter, composer and fantasy illustrator born in the Canary Islands and now living in Barcelona (Spain). A world of fantasy: dark fairy tales, romantic ghost stories, and “other creatures” that dwell in the boundaries between dream and awareness inspired by her personal experience with sleep paralysis, night horrors and hypnagogia… old fears and passions… ancient shadows…

Her debut album, Ancient Shadows is a collection of 19 illustrated song-tales that take you to a ride through the haunting and spectral realm she creates with her sorrowful eerie but sensuous music, led by an angelic and silky voice that invites you to shed your own cultivated defences. Wistful, evocative, pure and meaningful.

Priscilla studied Molecular Biology but now her life is devoted to illustration and music. Her drawings and paintings, just like the songs, are inspired by old fairy books and gothic literature: haunted houses, mourning willows, nymphs,vengeful fairies, ghosts fluttering like moths around the living… A world of spectral romance and intense melancholia. Also, her personal experience with sleep paralysis, night horrors and hypnagogia is a constant influence in her lyrics.

With a remarkable success in internet, Priscilla’s dedicated fan base continues to multiply. After declining a wealth of record deals, including majors, just to remain true to the spirit of her music, Priscilla founded YIDNETH, her own record label and publishing company that takes name from her illustrated book project. She also created, along with the spanish composer Héctor Corcín, Nuevas Músicas (nuevasmusicas.org), a platform for the promotion of independent artists in Spain in genres like hers. She has been aired in several spanish national television channels, featured in countless specialized magazines and media and also played in radio stations all over the world. As a songwriter and vocalist she’s participated in several published cds and soundtracks and also have performed in some european emerging talent festivals.

Often compared to Tori Amos. Kate Bush and Enya, Priscilla claims to be nourished by Tears for Fears (Orzábal lyrics), Cocteau Twins and most importantly her fascination for film scores and soundtracks. Still she truly carves out an original image for herself and is more than the sum total of her music influences creating an unique and personal soundscape that is difficult to put a finger on or describe.

Read reviews of:
[Ancient Shadows (the ghost and the Fairy)]